Tirich Mir is the highest mountain of the Hindu Kush range, and the highest mountain in the world outside of the Himalayas-Karakoram range, located in Chitral District of Pakistan. The mountain was first climbed on 21 July 1950 by a Norwegian expedition consisting of Arne Næss, P. Kvernberg, H. Berg, and Tony Streather. Tirich Mir overlooks Chitral town, and can be easily seen from the main bazaar. It is the closest mountain to Aconcagua which is higher than Aconcagua, and thus determines Aconcagua’s topographic isolation. The last village in Chitral before reaching Tirich Mir is the village of Tirich.

This valley begins at Soorwaht , where Terich River meets Torkhow River from the west, up to Shagrom- the last permanent settlement of the valley and from there onward there are summer grazing pastures and huts of shepherds up to the snout of lower Terich glacier and goes further up to Terich Concordia where glaciers from seven sub valleys slide down and join at the Concordia. 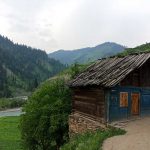 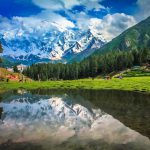