Muztagh Tower also:(Mustagh Tower; Muztagh: ice tower), is a mountain in the Baltoro Muztagh, part of the Karakoram range in Baltistan on the border of the Gilgit–Baltistan region of Pakistan and the Xinjiang Uyghur Autonomous Region of China. It stands between the basins of the Baltoro and Sarpo Laggo glaciers. The Mustagh Tower was the subject of a photograph taken by Vittorio Sella during the 1909 Italian expedition to K2. Taken from the upper Baltoro, due southeast of the mountain, the twin summits were perfectly aligned and the mountain was seen as a slender tooth, and looked impregnable. In 1941, the photograph was featured in a book on mountaineering with the caption “The Last Citadel”.

Nearly fifty years after Sella’s photo was taken, in 1956, his photograph inspired two expeditions to race for the first ascent. Both teams found their routes less steep than Sella’s view had suggested. 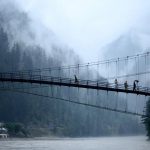