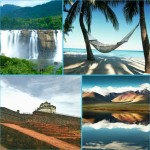 The Jim Corbett National Park is situated at an approximate distance of 260 Kms from the National Capital Delhi. The small town near Corbett is Ramnagar which forms the headquarters of CTR. The city is well connected by road or rail with major cities of India like Moradabad, Nainital, Bareilly and Delhi.

“The book of nature has no beginning as it has no end. Open this book where you will, and at any period of your life, and if you have the desire to acquire the knowledge you will find it of intense interest, and no matter how intently you study the pages, your interest will not flag, for in nature there is no finality”– Jim Corbett

The time I spent in the jungle held unalloyed happiness for me, and that happiness I would now gladly share. My happiness, I believe, resulted from the fact that all wildlife is happy in its natural surroundings. In nature, there is no sorrow, and no repining. Jim Corbett national park is in the foothills of Himalayan belt and has various geographical and ecological characteristics with splendid landscapes.

I visited the Jim Corbett National Park in the month of June 2017, This beautiful park is spread across 1250+ square Km and is divided into different zones. i.e. Bijrani, Dhikala, Jhirna, Dominda and Sonanadi. I entered the Park through Jhirna zone, which is closed to a town Ramnagar and is the only zone which remains open throughout the year, other zones are closed during monsoons (probably after 15th June)

I hired a Gypsy from my resort ‘The Wild Crest ‘ and I woke up early in the morning and ventured out at 6:00 a.m. and entered into park gate, formalities were hassle free and I was joined by my guide “Sukhbir Singh”, who advised me on the do’s and don’ts during the ride and then enlightened me with his knowledge about the park. Once into the jungle experience was awesome like the smell of the jungle, the sound of animals and birds was a treat to my senses. It was then that I realized that I should enjoy the ambiance of the Jungle in totality and not keep thinking about spotting the Tigers only!

All roads lead to that one creation of God, perhaps God himself as far as this pilgrimage is concerned and that is of course the Royal Bengal Tiger. I sighted the younger ones for less than 2 minutes before it disappeared into the bushes. This made my day and I was all the more looking forward for more animals to spot. During the safari, I spotted different species of deer, and I was lucky enough to see dancing peacock ,saw a wild boar, Jackals, flying squirrels, sambar deer, and many species of birds and I was expecting one more time for tiger sighting but wasn’t lucky the rest of the time. The jeep safari goes about 20 kms inside the jungle and they have fixed routes which they follow and comes back via a little different route. The total jeep safari was about 2:30 hours and returned to the Resort at 10:00 a.m.

Overall, a wonderful safari and I am thankful to the guide whose knowledge was not only outstanding but he was also an excellent spotter of wildlife. I surely love this park and will go there again.

In the evening, I visited  Garjiya Devi Temple on the river Kosi, which is located on the outskirts of Corbett national park. The temple is situated over a large rock in the Kosi River and one of the most famous temples of Nainital district. There’s also a statue of Lakshmi Narayan of 9th century which is made from black granite. Many people take bath in the Crystal clear water of Kosi River.

If you are planning a trip to Corbett, only for the tiger, DON’T do it! There is so much more to the jungle right from roaming around in open jeeps to knowing about the architectural instincts of ants.

How to get there

The small city Ramnagar has a very good road network that connects the different cities of India. Uttarakhand state government buses ply at a short interval of time from Delhi, Moradabad, Haldwani that reaches directly Ramnagar. Corbett is only 15 Kms from Ramnagar town. The surface drive from Delhi to Corbett takes approximate five and half hours. The designated approach routes are:

Ramnagar is the only nearest railway station to Jim Corbett National Park. A direct train to Ramnagar runs from Delhi. Alternatively, one can reach up to Haldwani/Kashipur/Kathgodam and come to Ramnagar by road. Taxis are easily available from these stations.