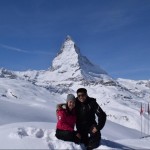 Iceland is a very small country of merely 332,529 people, making it the most sparsely populated country in Europe and 8th in the world. Its contrast of lava fields, snow, volcanoes and glaciers gives it the nickname “The Land of Fire and Ice”. It is a magical place filled with beauty and wonder, definitely one of our favorites destination thus far. It is however very expensive, in fact it is ranked 3rd in overall cost of living of countries in the world. We pride ourselves on being excellent bargain hunters so we will save you the trouble of looking and let you know there is no cheap way to travel Iceland. Here’s a few fun facts about the country:

We had a really nice start to our trip to Iceland. It was roughly a 2 hour journey from the airport to our Airbnb location. When we arrived at the bus stop near the Airbnb location we began trying to figure out where we needed to be. It was also snowing and the sidewalks were snow packed making it difficult to drag our suitcases around. A stranger noticed we were struggling from his window and he came out and drove us to the house. Talk about Icelandic hospitality! That night after we got settled in, we went to a grocery store to get some supplies. After going through the till, we found out they give you a box of complimentary smarties! Needless to say, Jireh was quite impressed. Although what wasn’t impressive is the prices. Everything here in Iceland is very expensive. For example 1 coffee, 2 chicken sandwiches and 1 donuts at Dunkin Donuts cost us $35 CAD!

The next day we did a 14 hour tour bus to Skogafoss, Jokulsarlon Glacier Lagoon and Seljalandsfoss. It ended up turning into about a 21 hour day from when we woke up until we got home. Running off only a few hours of sleep, we started the day before the crack of dawn, had a quick breakfast and began our way to the bus depot. In an effort to save money, we decided to make the little over an hour hike to avoid paying for a couple extra buses. FYI city buses cost $10 CAD a person! So we opted to save some money and get some exercise.

The tour was really good, long but good. Also very expensive, it costed us $440 CAD for two of us through Grey Line Iceland. Before coming here we calculated several different methods of visiting attractions we wanted to see including renting a vehicle. Being as the cost difference wasn’t hugely significant between renting a vehicle and doing tours, we decided to book a couple bus tours so I didn’t have to drive. The lack of cost difference is largely due to the extremely high gas prices and distance between attractions and the city. Our first stop was Skogafoss. It is a beautiful waterfall that is 60m high and 15m across.

On our way to our next stop, driving along Iceland’s southern coast we passed through the largest lava field on earth and on top of that lava field is also the largest single unit of moss in the world. Iceland’s contrast of lava fields, snow, volcanos and glaciers give it the nickname “The Land of Fire and Ice”. The Jokulsarlon Glacier Lagoon has recently become a part of Vatnajokull National Park which is currently the largest national park in Europe. The lagoon itself is simply breathtaking, it is a salt/fresh water lake with glacial icebergs surrounded by a cascading mountain range. For those of you wanting to travel here I would recommend proper footwear as it is a very icy and hilly area.

The last stop on our journey was the Seljalandsfoss. It’s another waterfall also 60m high. The water from this fall originates from a volcanic glacier. Because solar wind activity was high that night and we had a break in the clouds, we were hoping to see some northern lights but unfortunately we were not so lucky.

We arrived back in Reykjavik an hour later than scheduled at around 11:30 pm. It was snowing quite heavily when we arrived but we decided to stick with the plan and walk back home. It was about 1:00 am when we got back to the house and of course Jireh had to post the pictures before we went to bed, so we didn’t end up sleeping ’til about 2:00 am. Overall pretty good start to Iceland!

T’was another epic day in Iceland! We did another bus tour today with Bus Travel Iceland. With their Golden Circle tour package we were able to visit some of Iceland’s oldest and more famous attractions Kerid, Gullfoss, Strokkur and Thingvellir National Park. This one costed us $210 CAD for both of us.

We began the day with a quick stop at Kerid. This is a volcanic crater lake now commonly used to hold concerts. This attraction unlike most others is on private land so if you visit here without a tour group you will have to pay an entrance fee, whereas most other attractions are on government land making them free to the public.

The next stop was Gullfoss otherwise known as the Golden Waterfall. It is among the most popular tourist attractions in Iceland and is recognized by most as the most beautiful waterfall in all of Iceland.

About 20 minutes away from Gullfoss was Strokkur. Strokkur is a fascinating geyser that erupts every 6-10 minutes to a height of between 15-20 m but can sometimes erupt up to 40 m. Definitely a MUST if you visit here. Jireh got a little angry while we were trying to capture the geyser on video.

The last stop on our tour was the Thingvellir National Park. It is a UNESCO World Heritage Site with amazing views. It is however most famous for its walkway built down the centre of the continental drift. Half of Iceland is on the North American continental tectonic plate while the other half is on the Eurasia continental plate and they are slowly drifting apart on an average of about 2 cm per year. For those of you familiar with the Game of Thrones much of the area north of the wall was filmed in this park.

Even though it costed us an arm and a leg this tour was worth it. Had a good time and saw some truly amazing sights.

Today we went exploring the city of Reykjavik. Being as we are already way over budget we tried to look for some more cost effective activities. We went around downtown and took some pictures with some local landmarks including the Solfar and the Hallgrimskirkja. Both of these places are within walking distance of each other so it only cost us the price of bus fare.

Solfar (The Sun Voyager) is a stainless steel art sculpture built on Iceland’s west coast, with the backdrop of the steel blue ocean water and the majestic Mount Esja.

Hallgrimskirkja is a Lutheran parish church standing 75 meters tall, making it the tallest church in all of Iceland. Its design is inspired by Icelandic nature in particular the basalt columns.

After arriving home our host directed us to an outdoor public swimming pool/natural hot spring that was only 10 minutes away from our place. Who needs the Blue Lagoon when you could soak in the waters of Breidholtslaug for a fraction of the price? It cost us only about $25 CAD whereas the Blue Lagoon would have cost us $265 CAD including transportation. One interesting thing I noticed at the pool is that they don’t use chlorine in the water. They also make sure that people shower properly before entering. With all this in mind, I think it’s fair to assume it is common courtesy not to pee in the pool. As a side note, we did try get into the Blue Lagoon as it is an icon of Iceland but we did not book early enough in advance. If you are planning to visit the Blue Lagoon, you should book a reservation at least a month in advance. We tried to book only two weeks in advance and we could only find available time slots between 6 pm-10 pm (after dark), so we decided not to go.

A Tremendous Tale Travelling To Turkey