Chogolisa is a trapezoidal mountain in the Karakoram range in the Gilgit-Baltistan region of Pakistan. It lies near the Baltoro Glacier in the Concordia region, which is home to some of the highest peaks of the world. Chogolisa has several peaks: the highest, on the SW face (Chogolisa I), rises to 7,668 metres (25,157 ft); the second highest at 7,654 metres on the NE side (Chogolisa II) is the one named Bride Peak by Martin Conway in 1892. In 1909, a party led by Duke of the Abruzzi reached 7,498 m (24,600 ft) from a base camp located on the northern side and a high camp on the Chogolisa saddle at 6,335 m. Bad weather stopped the party from ascending further, but their climb established a world altitude record.

Hermann Buhl and Kurt Diemberger attempted Chogolisa in 1957 after they had successfully summitted Broad Peak behind Marcus Schmuck and Fritz Wintersteller a few weeks earlier. On June 25 they left camp I and camped in a saddle at 6,706 m on the SE ridge. On June 27 a sudden snow storm forced them to retreat and, on the descent, Buhl broke off a big cornice and fell into the mountain’s near vertical north face. His body has never been found. 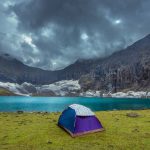 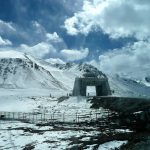