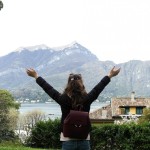 Barcelona is vibrant, colourful and packed with interesting places to visit. It is certainly perfect for a short city break, especially if you are going off-season. This is what I decided to do and visited the city for two days in the middle of the winter. I would strongly recommend spending a few more days as it is worth it and there are plenty of places you can visit.

All of my travels, no matter how short are always extremely well planned, and almost every hour is pre-organized and booked in advanced. These two days in Barcelona were very different, though. I decided on a more relaxed and chill city break with plenty of delicious food and wine. Here’s an idea how to spend 48 hours in Barcelona.

Arriving and Finding a Beautiful Place to Stay

Getting to Barcelona was quite easy for me – I had a short flight from Germany, which arrived extremely late in Barcelona. From the airport, I got the metro to the hotel I had booked. The Hotel that I stayed at was Praktik Garden and I cannot recommend it enough. The area is huge and full of nightlife with many restaurants and bars. What is more, Gaudi’s impressive masterpiece Casa Batllo is only a few minutes walk  from Praktik Garden Hotel. The corridors are colourful and vivid, the rooms have very minimalist design, the garden is green and the staff is friendly and polite.

Gaudi’s masterpieces are impressive and they should be on top of your list of things to see in Barcelona. And what better way to start the journey than Sagrada Familia – well, personally, that is where i started from. I had booked tickets in advance for 11:00 AM and this worked absolutely great for me.

I was thrilled when in the morning I checked the weather outside and the sun was up and shinning. It was still January, but the weather was very pleasant for a walk. So I hurried to leave the hotel room and took the 20 minute walk to the impressive Sagrada Familia Cathedral.

The wide and quiet streets with the colourful charming buildings combined with the fresh morning breeze were a fantastic way to start the day. I was pleasantly surprised by the empty and peaceful boulevards. The warm chocolate croissants and the fresh flavored coffee bought from a small bakery along the way made the walk extra pleasing.

And then, Sagrada Familia came into sight at the end of the street, standing high and impressive with its extraordinary architectural style. Despite being still unfinished, Sagrada Familia will leave you in awe. The cathedral is due to be completed in 2026 when it will be the tallest religious building in the world. Sagrada Familia is truly unique with its Gothic and Modern style at the same time.

I took my time and enjoyed the fascinating architecture and the stunning stained glass windows. As the sunlight comes through the windows, it forms beautiful colourful rainbow reflections all over the cathedral hall. I was absolutely mesmerized!

After a short visit to the souvenir shop at Sagrada Familia, the tour around the city continues. The next stop was Parc de la Ciutadella. I can only imagine how absolutely spectacular the park is during the hot summer days. However, even in January the walk around the par was extremely nice and pleasant.

At the center of the park there is a lake and a zoo. The flora and the fauna of the park are also impressive. Combined with the lively vibe of the park, I could spend hours relaxing and wandering around the park.

Tickets for Casa Mila are booked in advance for the afternoon and as there is a bit of time left until then, I decided to take a quick stop for a lunch break. I randomly took a street and I quickly found a nice looking restaurant. Unfortunately, I cannot remember the name of the place, but I can certainly remember the taste. I managed to enjoy a nice lunch menu full of tasty Spanish tapas and a glass or two of flavored, aromatic wine. After an hour and a half, I feel merry and excited and I am ready for the next attraction.

Casa Mila is the last stop for the day. Tickets are booked in advance and I managed to skip the line. I headed straight to the roof as I have only a few minutes before the golden hour.

La Pedrera or Casa Mila’s architecture is absolutely impressive with its curved facade. The roof terrace is a masterpiece by itself. At first glance I wondered what all these uniquely designed towers are. What a surprise when I understood that they are not only designed for a more interesting appearance but they are actually chimneys and air pipes part of a ventilation system.

The golden hour combined with the orange colours of the wavy towers makes for an interesting and impressive end of the day. You will be able to see the city and its buildings standing tall, with Sagrada Familia’s magnificent architectural style far in the distance.

The tour around Casa Mila continued by going inside the building and admiring the tall ceilings and the interesting interior design of one of the apartments converted into a small museum. You will be surprised when you understand that Casa Mila is also a residential building and at the same time it was declared as one of the World Heritage Sites by UNESCO. Can you imagine how cool would it be to live there?

The day finished with a walk around some of the small streets of the city and even more tapas and Paella with Sea food and more delicious wine.

Day 2 – More of Gaudi’s work and Wanders around Barcelona

No trip to Barcelona is complete without a visit to Park Guell. It is certainly my favourite place in the city.

Even though the park is not located in the center of the city, getting there was quite easy by getting the metro. A large part of the park you can see free of charge, but I suggest getting tickets in advance for approximately €7.50. They allow only 400 people at a time, and having a pre-booked ticket will guarantee your entrance as well as skipping the line at the gate.

The day was slightly grey and gloomy and showers were expected. Even still, I was absolutely impressed by the park. The mosaics are colorful, unusual and vibrant. Just stroll around at your own pace and enjoy the park. Take photos, enjoy the view of the city and have fun. The park is beautiful and totally worth the visit.

After the visit to the park, we found a very small local café, which was full of locals and the staff barely spoke any English. We still managed to order and had a fabulous brunch and some extremely tasty smoothies.

The rest of the day was entirely for us with nothing planned, so we headed back to La Rambla. La Rambla is the most popular boulevard in the city with plenty of restaurants and shops. I had previously heard that the street is extremely touristy and not worth it, but as it was off season and the weather was a bit cloudy, the pedestrian street was almost completely empty and quiet.

The smell of hot chocolate and fried dough was filling the air, was so tempting that I couldn’t resist some traditional Spanish churros with plenty of chocolate. They were absolutely delicious, so I strongly advise giving them a try while in Barcelona.

The walk around the city continued with a visit to the Gothic Quarter. The sky started getting even gloomier and combined with the mysterious narrow streets of this dark neighborhood, the walk around the alleyways was quite spooky and scary. The area has a medieval, historic feel with its small cobblestoned alleys. I had just over an hour left to get some souvenirs and take a last look at the beautiful architectural style of the neighborhood.

Barcelona was one of my favourite short city breaks. I was a bit disappointed as I did not manage to explore as much as I wanted to, however, the entire holiday was a lot more chilled and I managed to enjoy every minute of it, without having to hurry and stick to a plan. Barcelona has so much to offer, though, that in order to get the full Spanish experience you need at least a week of this fascinating city.

My name is Polly Dimitrova and I am Bulgarian who is trying to live life to the fullest by travelling the world, exploring new places, taking pictures, collecting memories and being happy.

A Tremendous Tale Travelling To Turkey

My name is Polly Dimitrova and I am Bulgarian who is trying to live life to the fullest by travelling the world, exploring new places, taking pictures, collecting memories and being happy.