American Dream – Three months of travelling along the East Coast 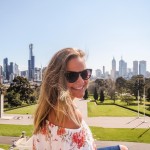 Sometimes new adventures begin whilst still being in another one. When I was in Melbourne for my third time in 2016, I decided that it was time to tick another destination off my bucketlist at the end of this year. When I was younger, I thought that I’d live in New York at some point in my life – but so far, I had made it to the other side of the world several times but never made it to America. This was about to change in October 2016 when I boarded the plane to New York.

Just like in Israel, airport security was rather strict in America. Anyway, I got through it and after leaving John F. Kennedy International Airport I had American soil under my feet for the first time ever. I took the train heading towards the central and felt like I was in a movie. A thousand times I had seen this scenery in countless movies and now, I had finally made it. But I found out that it was also quite expensive when I entered my Airbnb which was going to be my home for the next few days. The owner had divided the living room with a wall and then rented one half for prices similar to a hotel room – usual business in New York. Anyway, the location was great and as I was super tired, I basically fell asleep right away.

The next day, I got ready to explore the city and realised how hot it can get in New York in October. Me, wearing flip-flops and a dress, in between Christmas advertisement at Times Square – what a world, I thought. Rockefeller Centre was next – the ice-skating rink I knew from “Home Alone 2” had already been build up but – the impressive Christmas Tree was still missing. As I wanted to get a good outlook of New York, I went up the Rockefeller Centre and enjoyed the view. I can’t describe the feeling I got up there, but everything suddenly seemed possible! “If you can make it here, you can make it everywhere” as Alicia Keys said. I took a rickshaw to get to the next stop – Central Park. Lunch break in the sunshine – somewhere in New York.

At Wall Street, everyone always seemed so hectic and you get the impression that everyone around you is super important. The election between Trump and Clinton was in full swing and I got the feeling, that Trump already owned all of New York. One Trump Tower after another – just as humble as the man himself.

The 9/11 memorial really gets you thinking. Pictures, that we all know from TV, came to my mind very vividly. Reading the engraved names of the people that had lost their lives made me feel like I had heard every single one of them before. Goosebumps!

After my solely sightseeing trip in New York City, I travelled through the state of New York. Never have I seen an autumn forest as beautiful as this one – colours as yellow, red, brown, green painting the landscape– truly breath-taking. In America, you can not only find timber houses, but also whole areas with all houses built the same way. Really easy to get lost here! Halloween was right around the corner and it was obvious, that the Americans are crazy about it! Every house was a piece of art itself.

I spent Christmas time in Boston – with a lot of snow! White Christmas and Nut Cracker Musical on Christmas Eve – what an experience. It felt like I could tick off one thing after another of my bucket list. Even the shops I had previously worked for in Australia were even bigger in America. Everything was super-sized here – and Wallmart was my biggest horror. Who could ever decide what to get here? Other than that, food and drinks always come in family packs. And food in general was a whole issue itself – while eating burger, pizza and fries might have sounded like a good idea during the first few days, soon I couldn’t stand it anymore. I had the feeling that it was almost impossible to find something healthy. Popcorn as a starter – hot butter stations everywhere to make the food even more unhealthy and shows like “My 600-lb life” day in and out.

On the first day of the new year, I made my way from Boston to Washington D.C. Felt like I had never seen such a clean city – maybe it has something to do with the president living here. It was rainy and cold and there was nothing I would have done with more joy than just staying in my bed all day, but I didn’t have much time here! I got my rain coat and umbrella, so I could see what Washington had to offer. And I have to say, that the White House is much smaller than I expected, and it almost gets lost between the other white and much more impressive buildings. The Lincoln Memorial was much more interesting for instance, especially with its view of the Washington Monument. When I reached the National World War II Museum, I got so cold that I decided it would be a good idea to get someplace warmer.

This meant holiday feeling for sure. The beach, the people – many bizarre things happened here. When a Brazilian guy got out of the water, wearing a rather revealing piece of nothingness, it really made me think of Simon Gosejohann from Comedystreet. It felt like everyone on the beach, including Big Mama and a gay couple, got involved and soon nobody could help but laugh.

One day at Florida Keys

The Keys were the next stop – don’t be fooled, it’s hard work to get there! There is just one lane and so it might take hours before actually getting to the more than 200 coral reefs, which are connected with bridges. But it´s worth it! Such beautiful places along the way!

I had two more days that I was going to spend in Orlando, where I visited Universal Studios – a must-see! I wasn’t a huge fan of the rollercoaster but the whole atmosphere and the Harry Potter remake of the film set just got to me. Who would have thought, that there are Harry Potter fans that would spend $100 on a wand, which was able to get water to come out of a fountain when using a magic spell. But let’s be clear – it is just that one fountain that this works on! After a stop in a real American diner and a horror show, I got free tickets for a wrestling show. I’m sorry but I can’t get excited about this type of sports – in my opinion it simply was too bad for everyone in the arena and no one could take it seriously.

Before returning home, I made another stop in New York. I treated myself and got a nice hotel room at Times Square with a pool and a sauna. I walked on Brooklyn Bridge, made my way to Staten Island to catch a look at the Statue of Liberty, took a picture at Central Station à la Gossip Girl, visited the Nutella Café and ate one last burger at TGI Friday’s. When there is one thing New York has to offer, then it’s shopping – so I left some of my old things to make room for some new-ins!

New York – what dreams are made off – I will come back!